SKU:
tippa5
UPC:
669966997559
Short Description:
Looking for the best paintball Gear Deals? The Tippmann A5 black is sold here at your paintball super store. Get your BEST deals on paintball gear here!

Looking for the best paintball Gear Deals? The Tippmann A5 black is sold here at your paintball super store. Get your BEST deals on paintball gear here!
The Tippmann A-5 Marker Tippmann A5 black Its patented Cyclone Feed System links the feeder sprocket to the air system, giving it the power to unleash a fury of balls as fast as you can fire them. it can also be completely stripped and reassembled in the field in 60 seconds - without tools. With its all aluminum die cast receiver and extra-sturdy black finish, the Tippmann A-5 Marker is one of the toughest markers available. Other features include a shock-absorbing end cap for reduced wear and recoil; front-cocking knob, which allows for a fully enclosed receiver; and a 200-round wide-mouth hopper. In addition, it can be upgraded with many different accessories including, but not limited to, a Flatline Barrel System, Sniper barrels, collapsible stock, double trigger, low pressure kit and expansion chamber kit. Its fully-compatible for CO2, compressed air, or nitrogen, and is completely customizable for enhanced performance. response trigger allows 15+ balls per second rates of fire with air assisted trigger reset Specs: .68 caliber semi-automatic 15+ BPS 8.5 stock barrel 3.5 lbs MARKER is new in factory sealed box and includes the hopper and tool kit The A-5 is a semi-automatic pneumatic MARKER made by Tippmann for playing paintball. It was first produced in 2002 in the USA. It utilizes a revolutionary new loading concept called the "Cyclone Feed System." This enables the MARKER to have a high rate of fire without the addition of aftermarket loaders. It is known to be tough, rugged, affordable, and extensively able to be modified. The Tippmann A-5 is available in matte-black, and camouflage finishes and is modelled after the Heckler & Koch MP5K in appearance. It is extremely popular in MilSim scenario games due to the multitude of aftermarket parts which can make it resemble many real-world firearms.

Short Description Looking for the best paintball Gear Deals? The Tippmann A5 black is sold here at your paintball super store. Get your BEST deals on paintball gear here! 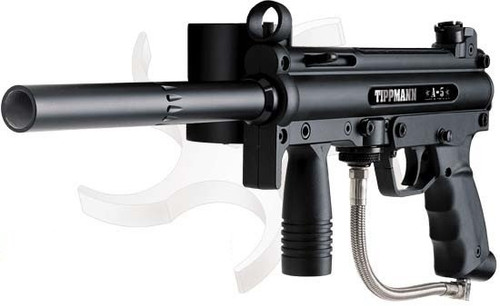